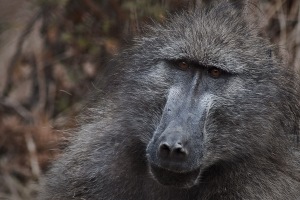 I am very interested in cross-species generalisations. For example, the observation that mammals tend to senesce faster than birds of an equivalent size, was derived from comparative analyses of survival senescence based on life tables. These generalisations are often challenged because of the limitations of the life-table approach and, more recently, the growing appreciation that there is more to senescence than simply an increase in the probability of death. In collaboration with Tim Coulson and Jean-Michel Gaillard I developed a method (Jones et al. 2008) that allows the estimation of rates of senescence from individual-based data without recourse to life-tables. I have used this method to examine senescence rates in annual individual fitness of 20 populations of birds and mammals with contrasting life histories and body size for which data on breeding success and survival are available. We found that senescence is widespread in the wild and is just as likely to occur in survival as it is in reproduction. In addition, we found evidence to suggest that mammals tend to senesce faster than birds because they have a faster life history for any given body size.

More recently I published an article in Nature which broadened the taxonomic scope of these kinds of comparative studies (Jones et al. 2014). We show that although senescence is probably ubiquitous in mammals and birds, there is a huge diversity of mortality and fertility trajectories if you look wider across the tree of life. In fact, negligible and even negative senescence (improvement with age) are probably common in some groups. I wrote a pop-sci article on the paper for The Conversation, reproduced here.

In collaboration with Roberto Salguero-Gomez, Hal Caswell, James Vaupel and others I am working on the COMPADRE Plant Matrix Database and the COMADRE Animal Matrix Database. These databases contain demographic information in the form of projection matrices for hundreds of plant and animal species, derived from published and personally communicated research (Salguero-Gomez, Jones et al. 2014). The databases also contain taxonomic, phylogenetic, ecological, and biogeographic covariates. This wealth of data empowers users to address a broad range of ecological and evolutionary questions. The goal of this project is to synthesize and digitize this literature, explore the evolution of senescence across the tree of life, and make the data publicly available to encourage more comparative demographic studies. Both databases are scheduled to go online, open access some time in 2014

The demography of hemiparasitic plants

Although they have very interesting life histories, hemiparasitic and parasitic plants are not often studied due to logistical difficulties. They are therefore relatively unknown demographically speaking. I am exploring the optimal conditions for the establishment, growth, survival and reproduction of mistletoe (Viscum album) collaboration with Roberto Salguero-Gomez, Mick Crawley and Sydne Record. Hemiparastic plants are excellent study systems in which to explore how survival-reproduction trade-offs shape the life history of the species, and how host-hemiparasite relationships affect eco-evolutionary dynamics. The project is funded in part by the British Ecological Society. 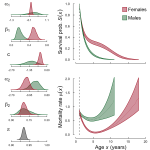 Individual-based analyses of mortality trajectories probably offer the best way to estimate mortality trajectories. I am collaborating on a project led by Fernando Colchero on the development of an R package called BaSTA (Colchero, Jones and Rebke 2012) to undertake these kind of analyses with problematic data, i.e. data where we don’t necessarily know birth or death dates.  We are currently testing the package with individual-based bird data from several UK bird species.

More information can be found on the BaSTA web page here.

The population biology of great tits 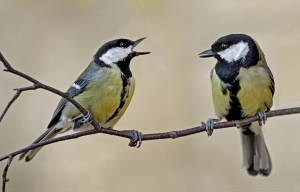 Soon after arriving at the University of Southern Denmark in early-2013, with Jennifer Lynch, I established a breeding population of great tits (Parus major). We are using the population for research, but also as a resource for teaching and community outreach. You can follow some of our adventures here: http://sdubirds.wordpress.com.